In many online shooters today, teamwork is optional.  While some players will choose to coordinate with each other and develop deep strategies, many others (myself included, for the most part) are content to roam the virtual battlefields of Call of Duty, Halo, and Destiny as lone wolves.  Upon playing in the Big Alpha for Evolve, the new multiplayer first person shooter from Turtle Rock Studios (best known as the creators of the Left 4 Dead franchise), I quickly realized that running around without a plan in this game only leads to disaster.  Whether you play as one of the four human hunters exploring the hostile alien world of Shear, or as the giant Monster who calls this planet home, you’ll need to pick your fights and learn how to effectively wield your unique abilities in combat in order to win. 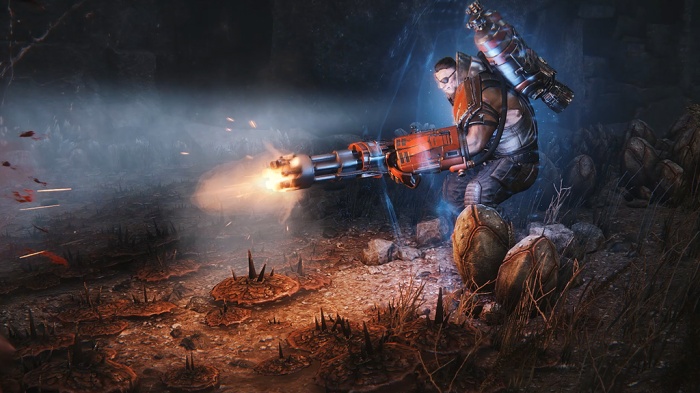 Each hunter team contains one character from each of the four classes: Assault, Support, Trapper, and Medic.  While everyone on the team carries at least one damage-dealing weapon, each member needs to utilize the special abilities of his or her class in order to bring down the Monster.  The Trapper, for example, carries a mobile force field that temporarily contains the Monster, thus giving the team a chance to deal heavy damage to the beast.  The four classes feel distinct enough from one another to support multiple playstyles, so those who prefer to hang back and support their teammates should feel just as comfortable as those who want to be in the thick of the action.

The lone Monster may not have to worry about teamwork, but strategy is no less vital.  Finding food and staying on the move are your first goals.  As a weak, level one Monster you have little chance of surviving an encounter with the hunters, but feed upon enough wildlife and you evolve into a more powerful creature, improving your odds in a fight.  In combat, focusing your attacks on individual targets is essential to survival; incapacitating a hunter removes tools from the hunters’ toolbox and can turn a losing battle into a victory, or at least a chance to escape and seek out more wildlife to consume. 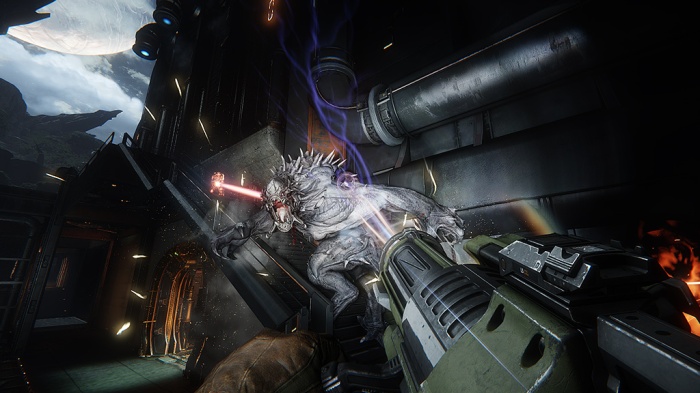 Overall, I’ve enjoyed my brief time with the Alpha; Evolve’s tactical, team-oriented gameplay acts as a good change of pace to the run-and-gun shooters that tend to dominate the market, and there are plenty of distinct classes to keep the game fresh and satisfy different players.